A Modern Approach to the Mediterranean Lifestyle

September 24, 2018 Off By Christina Efstathopoulos

Oils are the unsung heroes of cooking.  They are where we start off (marinating, sautéing, and baking), to finishing off (flavoring a salad or a cooked dish). This is why I chose “Cooking Oils” to be my very first blog (yay!). We have to start out with the basics and I’d like to give a brief overview of what we have to work with here.

They can be our friend, but they can also be our worst enemy.  The oils in our food are what can change it from being a health food to a saturated fat death food.  Over-consuming toxic oils will eventually lead to poor health, and we need to pay more attention to what they are and where they hide. Are you ready? Let’s begin….

What’s a “toxic” oil? An oil high in saturated fat and trans fats is associated with heart disease, obesity, and inflammation in the body. Where do we get our toxic fats from? processed baked goods, margarine, frozen foods, fried foods, fast foods, and even restaurant food. Look for the words “partially hydrogenated” on labels. We also have to worry about what’s not on the label…hexane (a cheap gasoline byproduct used in processing, it is also a neurotoxin), and GMOs (most soy and corn is GMO).  Let me break down a few of the popular ones below.

Soybean oil.  Soybeans are the most lucrative crop in the United States next to corn.  Any wonder why they put soy byproducts in almost everything?  Read the ingredient label on the back of any “vegetable oil” container and most likely it will be soybean oil.  We are consuming 30% of our fat intake from soybean oil here in the United States.  It’s  well known that most soy is also genetically-modified.  It’s Roundup Ready which means the pesticides are already built into the seed, so we’re ingesting all that good stuff too.  GMO soy is also highly estrogenic which means it can raise your estrogen levels which has been shown to adversely affect estrogen-dependent conditions, such as ER-positive breast cancer and affect your hormone balance.  Soy is also one of the top offenders when it comes to allergies.  Soybean oil has a low smoke point, so it’s not recommended to fry with.  Oils with low smoke points that are heated to high temperatures turn highly toxic.  Want to know a dirty little secret?  A LOT of our take-out food is cooked in soybean oil.  I’ve personally seen so many places put out their empty 5-gallon containers  of soybean oil right outside their restaurant door.  I recently stopped and took a picture of a popular chinese take out place in town.  It’s not just the cheap take-out places using it though, most restaurants rely on soybean oil for the majority of their cooked food, adding a tiny bit of the  expensive olive oil at the end as a flavoring. 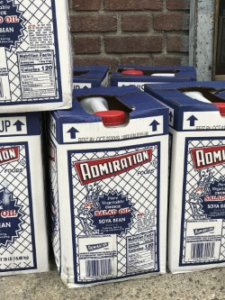 Canola oil…the lies we’ve been fed. No, it is not healthy. It is a highly-processed oil made from an imaginary “canola” plant. Have you ever heard of a canola plant? No? Well, maybe it’s because it doesn’t exist! This oil comes from the rapeseed plant and its oil, rapeseed oil, is used for industrial purposes, not for human consumption. But because it’s cheap, they process the heck out of it using chemical solvents (hexane) and deodorize it because after all the processing it goes through it stinks.  Studies show there is still trace amounts of hexane still present in it after production.  The rapeseed plant has been genetically engineered (GMO) since 1995, so that’s another thing you won’t see on the label.  This oil is also high in omega-6 since most of the omega-3s get destroyed  in processing, which makes it highly inflammatory and unstable when exposed to heat.  This creates free radicals which trigger diseases such as liver damage and cancer.

Corn oil…same sh** different name.  I hate to be repetitive, but most of the same issues with canola oil also apply to corn oil.  It’s highly refined, hexane saturated, GMO and high in omega-6.  What’s more, they have a huge marketing campaign out touting it as a healthy oil comparable to olive oil in lowering cholesterol! Ha! What they didn’t mention is that study was partially funded by the parent company of a major corn oil company!

Coconut oil…saturated, but in a good way.  The benefits of coconut oil are endless.  It’s antimicrobial, antiviral,, and antibacterial.  It has been shown to improve gut health by killing harmful pathogens including viruses, bacteria, fungi and candida.  Studies have shown that it can raise your good cholesterol and decrease your bad cholesterol.  It has a high smoke point, so it’s also safe to cook with.  Coconut oil has gotten a bad rap recently in the news claiming that it is not as healthy as it’s cracked up to be.  Yes, it is high in saturated fat, but what they neglect to mention is that coconut oil is very potent at raising HDL (good) cholesterol at the same time!  Coconut oil has a higher percentage of lauric acid than most oils, and that is probably the reason for its unusual boost to HDL.  It is so high in antioxidants that it is a superfood in its own right.  The only problem here is the flavor.  The best type of coconut oil to use is unrefined organic.  It’s never processed with chemicals and retains the most beneficial properties.  Some people may not be fans of the coconut-y taste of it and use refined coconut oil, but that can be a little tricky.  You see, refined coconut oil has been “refined” meaning it has been heated to a high temperature using chemicals, it is sometimes partially-hydrogenated which produces trans fats,  and sometimes sodium peroxide is added to increase shelf-life.

Avocado oil…because avocados are where it’s at!  How can you go wrong with avocado oil?  It’s mostly oleic acid (similar to olive oil), reduces LDL (bad) cholesterol, raises HDL (good) cholesterol.  High in lutein (eye health), antioxidants, and neutralizes free radicals.  It has a high smoke point so it’s safe to cook, sautee and fry with.  It also has a great taste! Buy it cold pressed for most health benefits.

Olive oil…our hero!  Hands down the best!  Being Greek, I am a bit partial when it comes to olive oil.  We use it for everything.  The scary part is that we all cook with it!  It doesn’t have a high smoke point, so it can be volatile and heat sensitive.  The part that I can’t understand though, is that it’s been around for centuries and the healthiest people on the planet have been cooking with it with no detriment to their health!  To be on the safe side, though, I try not to use  it for high heat cooking (even though I am guilty of slow simmering with it).   For high heat cooking, I discovered avocado oil which has a higher smoke point and has a mild flavor.  The health benefits of olive oil are well-known, high in antioxidants, lowers bad cholesterol, strong anti-inflammatory, protective against heart disease and cancer, antibacterial, and countless other benefits.  We call it “Liquid Gold”.  Buying extra-virgin is the way to go.  Look for Greek olive oil for best taste! wink wink!

“Everyone has a doctor in him/her, we just have to help it in its work.  The natural healing force within each one of us is the greatest force in getting well”

The father of medicine, Hippocrates